It was new in the 19th century and then became a famous way to message Loved ones in the 20th, up until the early 21st century. Now it’s somewhat of an obsolete gesture due to the presence of instant virtual messaging by the likes of Facebook, Twitter, and iMessage. Where a kind gesture is just a mouse click away.

However, the value of postcards seemed to have remained or skyrocketed high. As they are no longer restricted to just being mailed, but are being sold for good money. Because you can be offered hundreds, thousands, and even tens of dollars for your grandad’s or mom’s old dusty postcards, holiday cards, and postcards from special events or places.

Here’s a list of valuable vintage postcards to give you an idea of what the market demands look like: 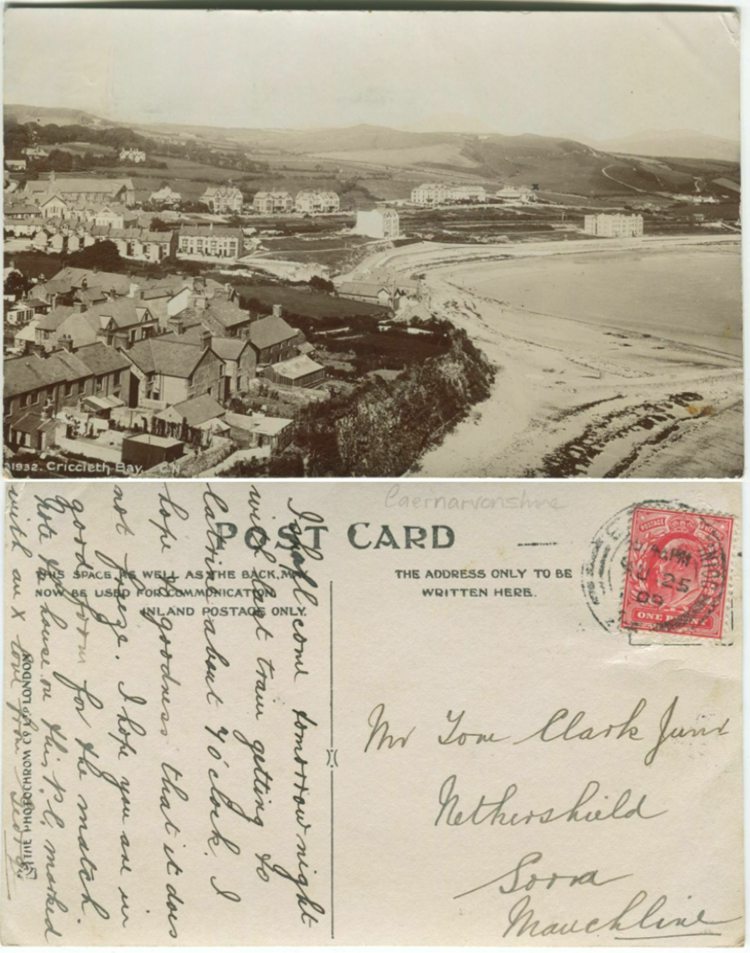 This is a photographic postcard that depicts colorized landscapes such as buildings, farms, and so on. Such types of postcards were made around 1939 which is some decades before private publishers were given the freedom to produce the cards they desired. 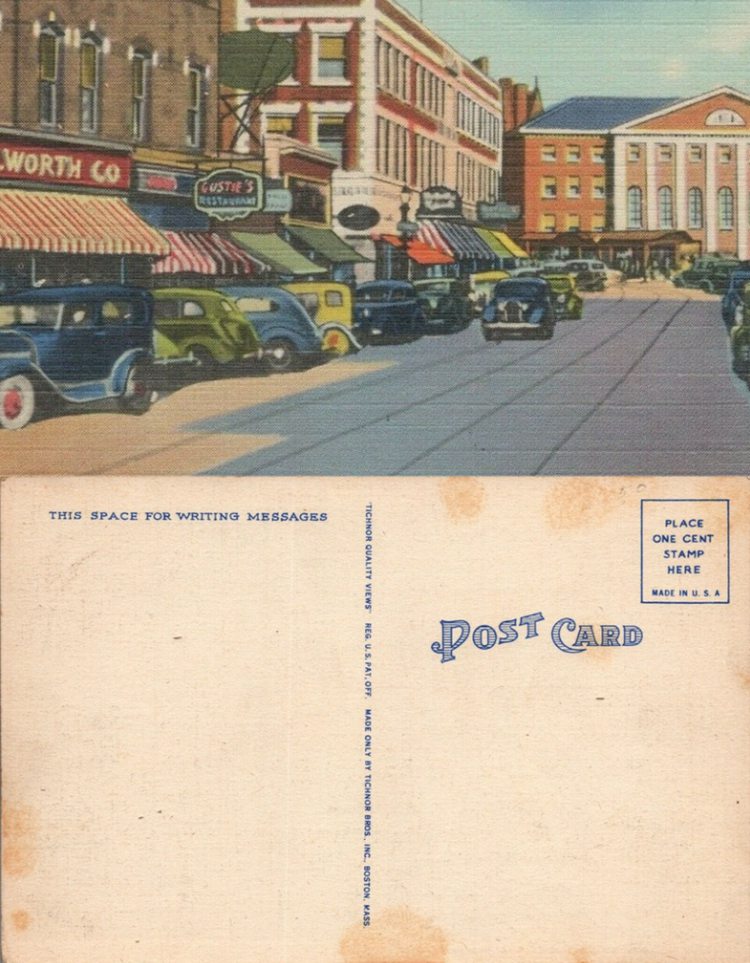 Around 1930, postcard papers with a significant percentage of linen were introduced. This material combination made ink appear a lot brighter. Thus improving artwork designs as you’d seen in animated topographical cards. 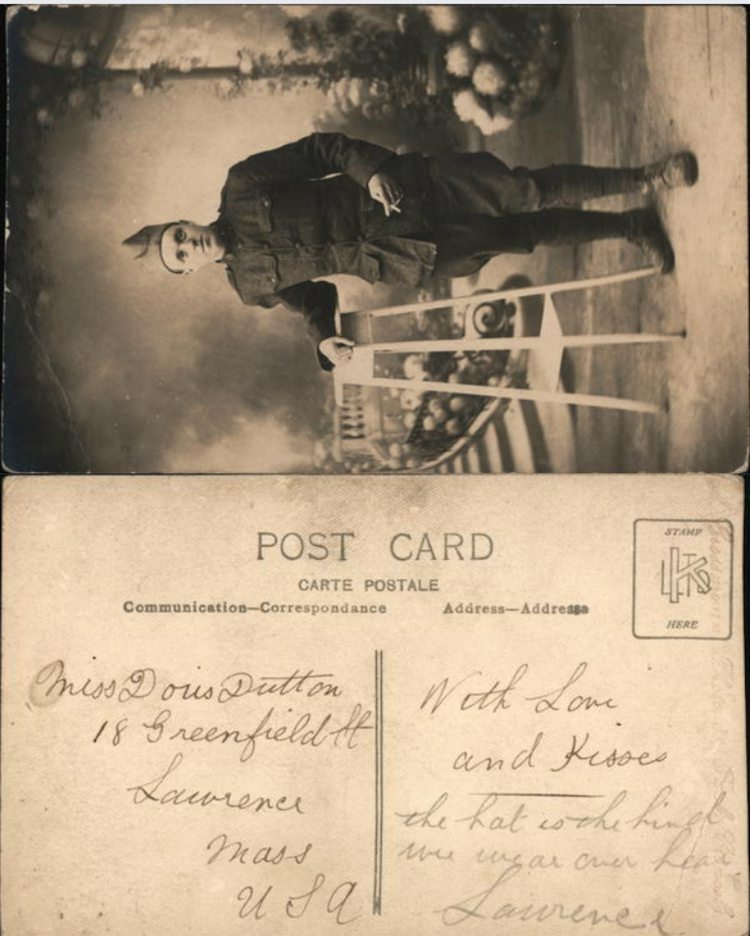 Portraits of postcards of famous people will add a lot of value. Especially if they’re from the early 90’s Era. 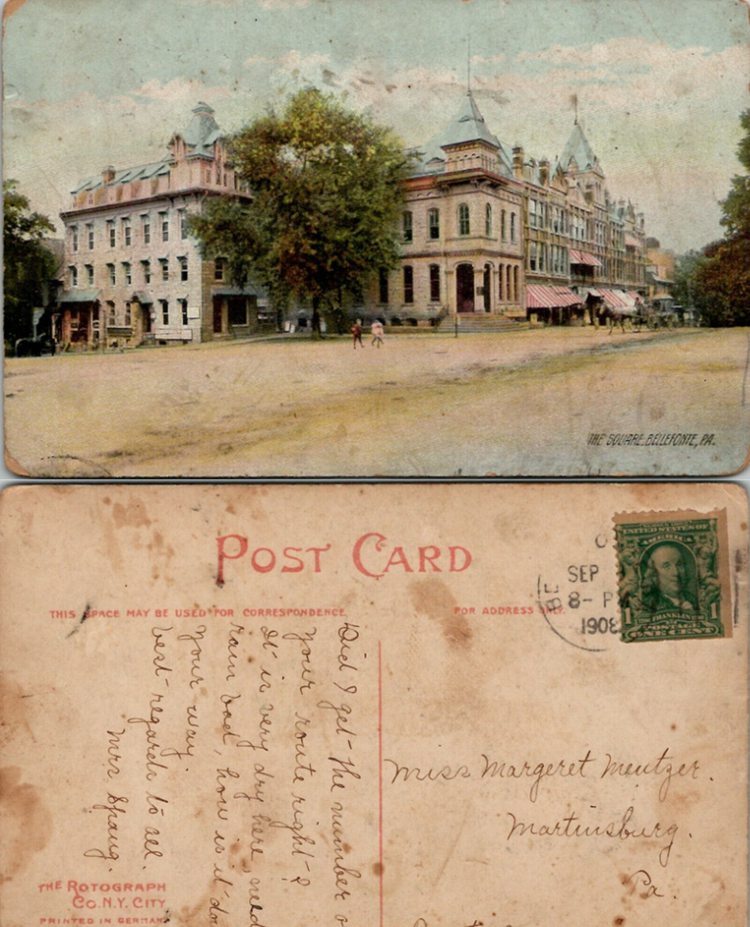 Such postcards are a result of a pullback from the address-only law. This means you can put down the address as well as your message on each corner of the address side on your postcard. This type of postcard was authorized to be in circulation in 1907. 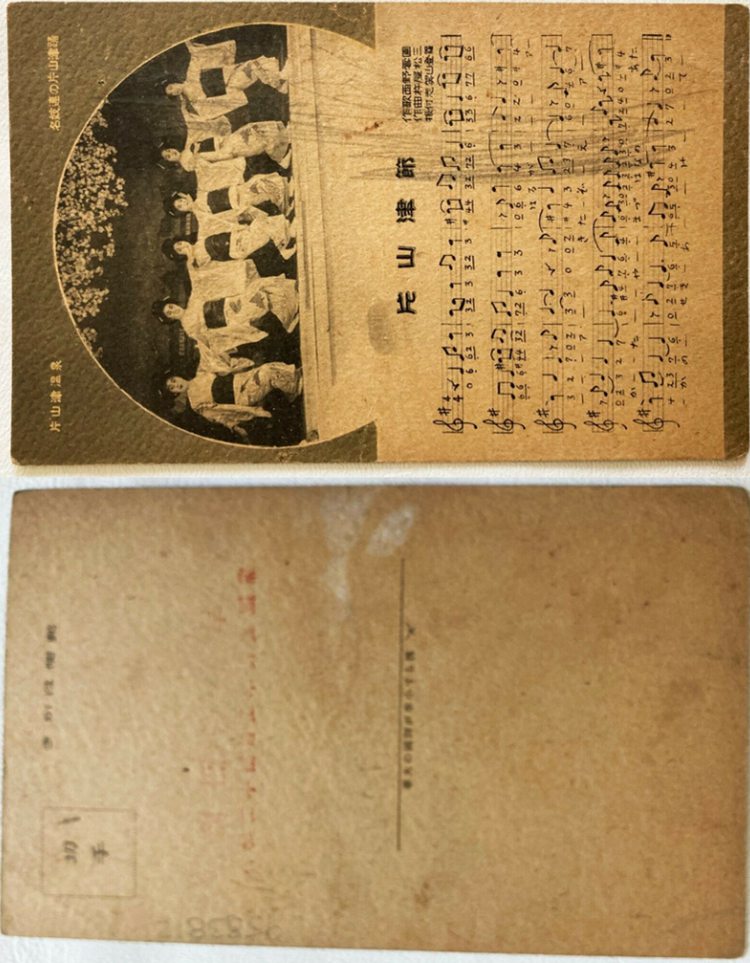 Vintage postcards with notes written on them add value. Because they allow you to enjoy the previous user’s personal view along with the culture of his or her time. 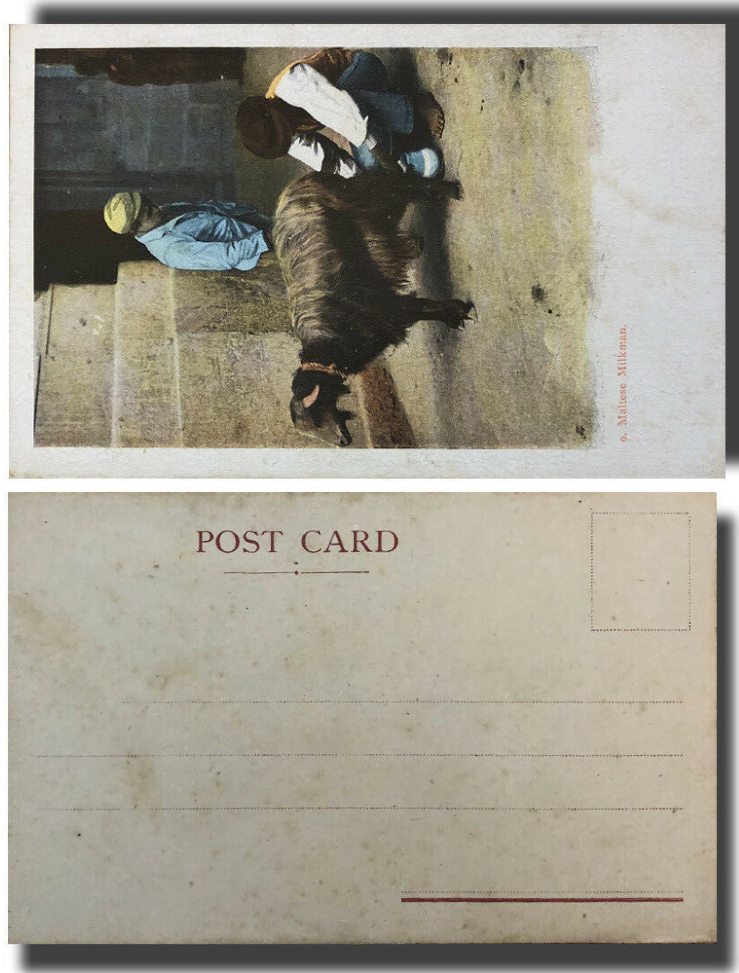 This card usually consists of a photograph on one side and an address-only section on the other side. Such postcards were introduced in 1901 which was the time private mailing were allowed to call their cards postcards. It then stopped circulating in 1907. When the divided back postcards were authorized by law. 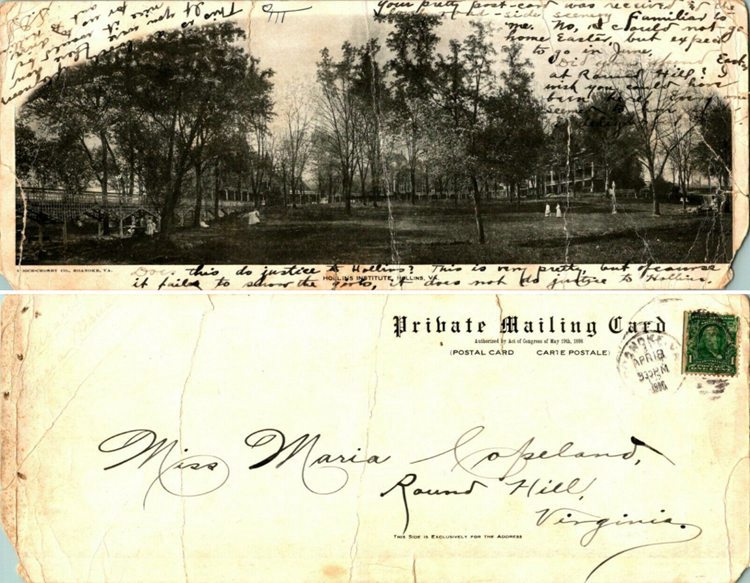 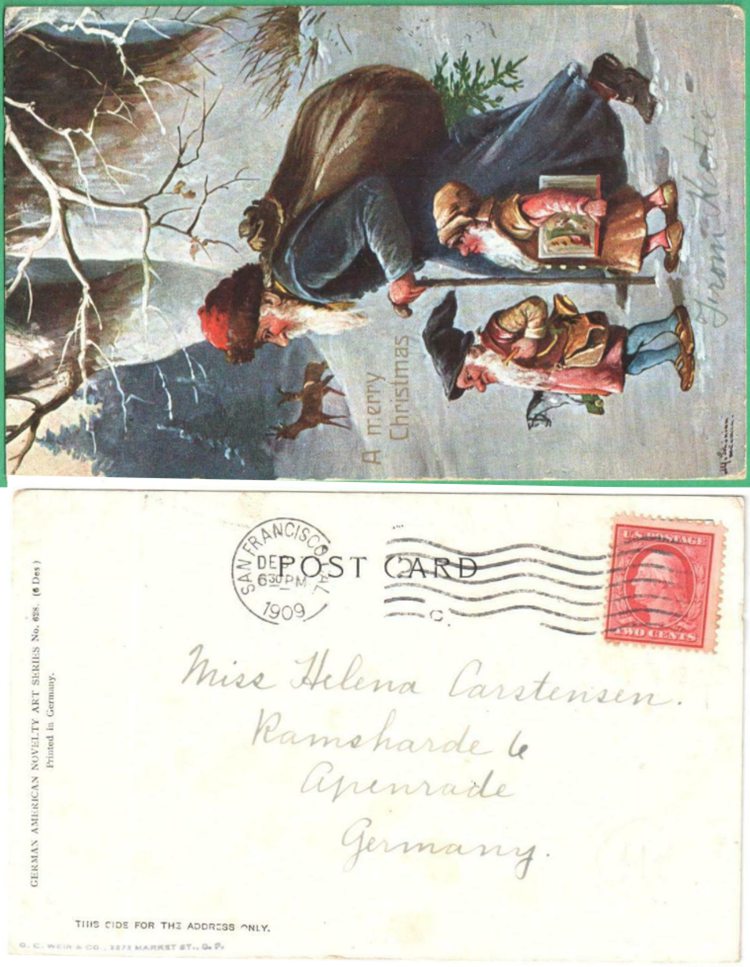 Holiday postcards are a pricey subject matter in the antique postcard market. Especially if it’s signed by a famous artist. For instance, an Ellen Clapsaddle Signed Christmas postcard attracts a high value. 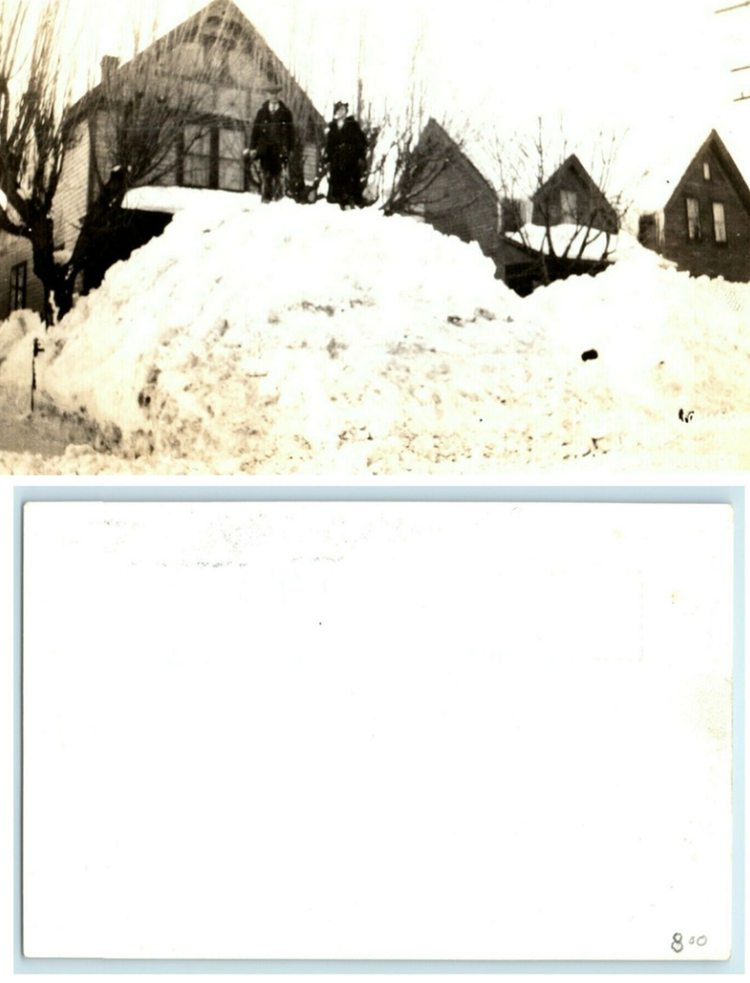 Postcards with white borders were being produced during the time of the first World War. Due to the drop in popularity of postcards. Such a problem affected the finances of private postcard businesses. Thus forcing them to save ink. This is why Unprinted white borders were introduced to the design of postcards (in 1915). 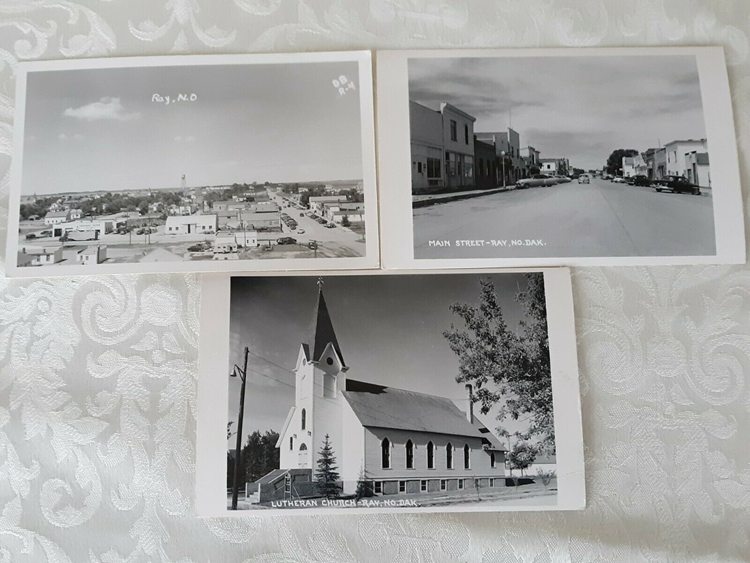 This involves a postcard collection consisting of the same photographic scene but captured at different times or Era. For instance, a collection of Times Square landscape scenes (at different centuries) can be sold for a hefty price. 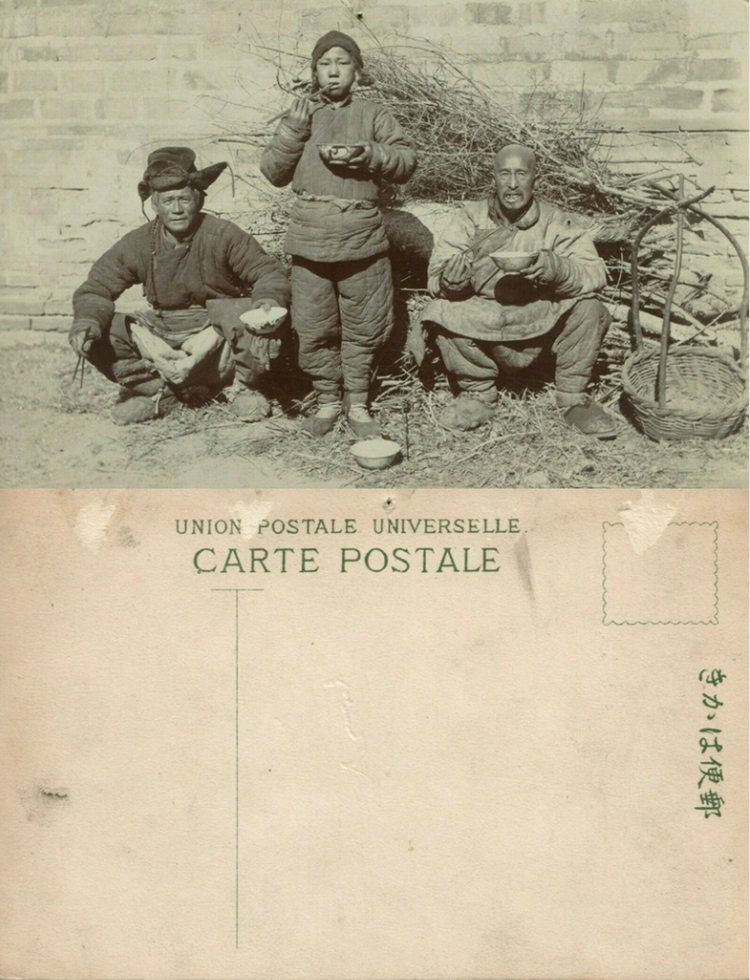 This card’s value is based on its rarity compared to European cards which were commonly posted. Such a card will also attract an increase in value if it’s rarely used natively. For instance, there’s a special Chinese card from 1903 which was posted to China via Russia. Its value hits around $6000. 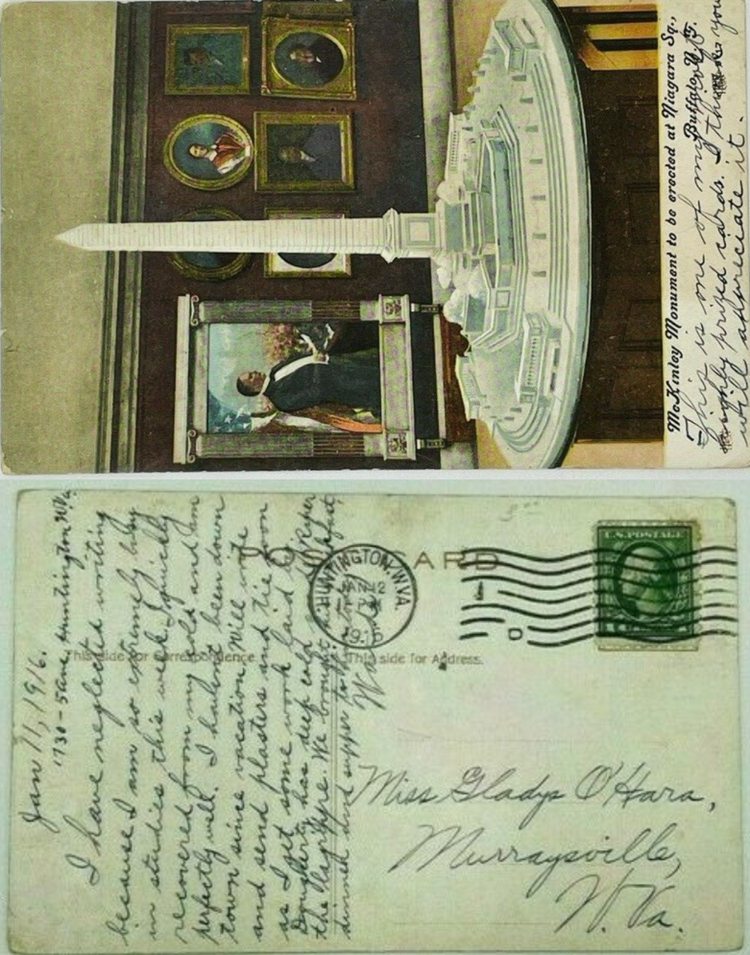 These types of postcards offer a glimpse or feeling from the past. As vintage postcards could contain pictures of a famous building (like the empire state building), a natural site, or street way. Their format includes a portrait Infront and a space for messages in the back. Such postcards are bound to fetch you a good price. 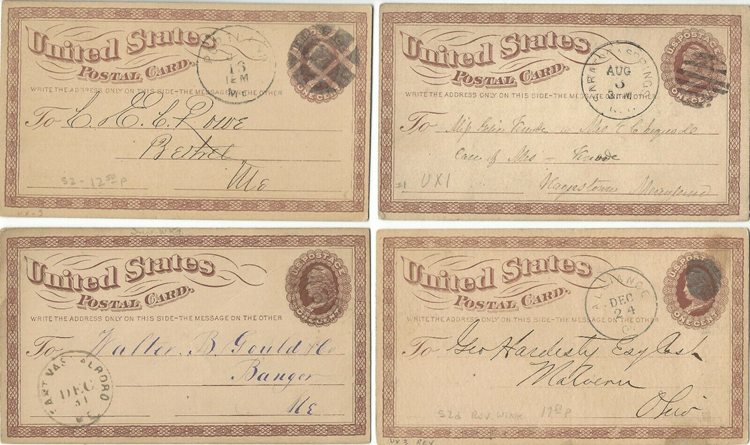 Government cards were forced by law to be less pricey than private mailings in 1872. Legislation at that time went as far as prohibiting the word “postal card” to be written on private mailings. To ensure citizens will most likely prioritize government-issued cards only. Such a card gets value from its age and historical significance (extreme government changes). 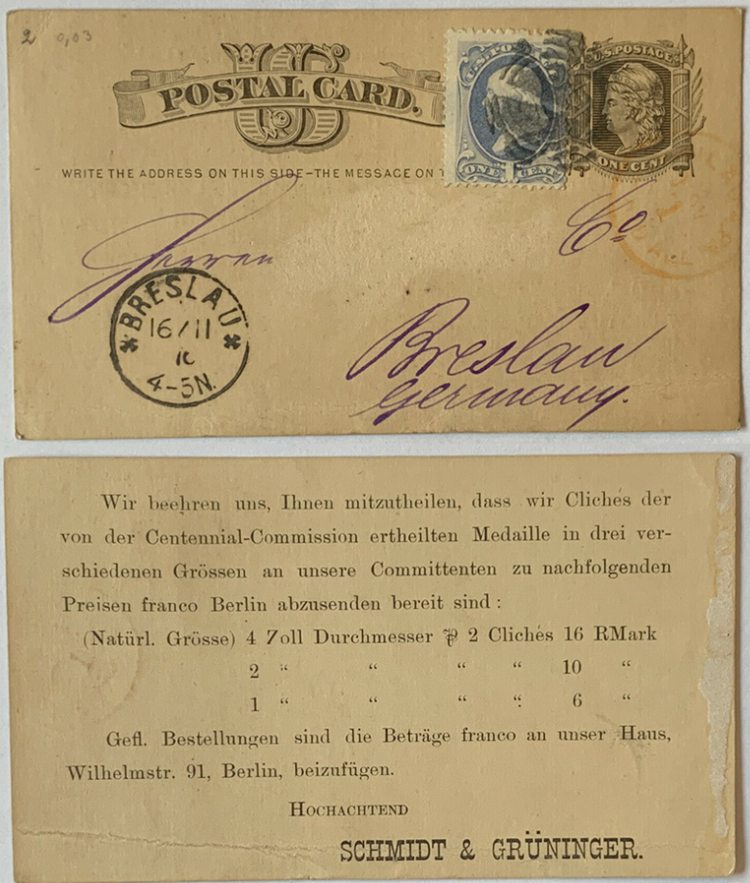 Lipman postal cards appeared in 1872 as one of the cards that were primarily printed and used in place of private mailings. During this time, private postcards were produced by either Hymen L. Lipman or John P. Charlton. As authorized by America’s congress. 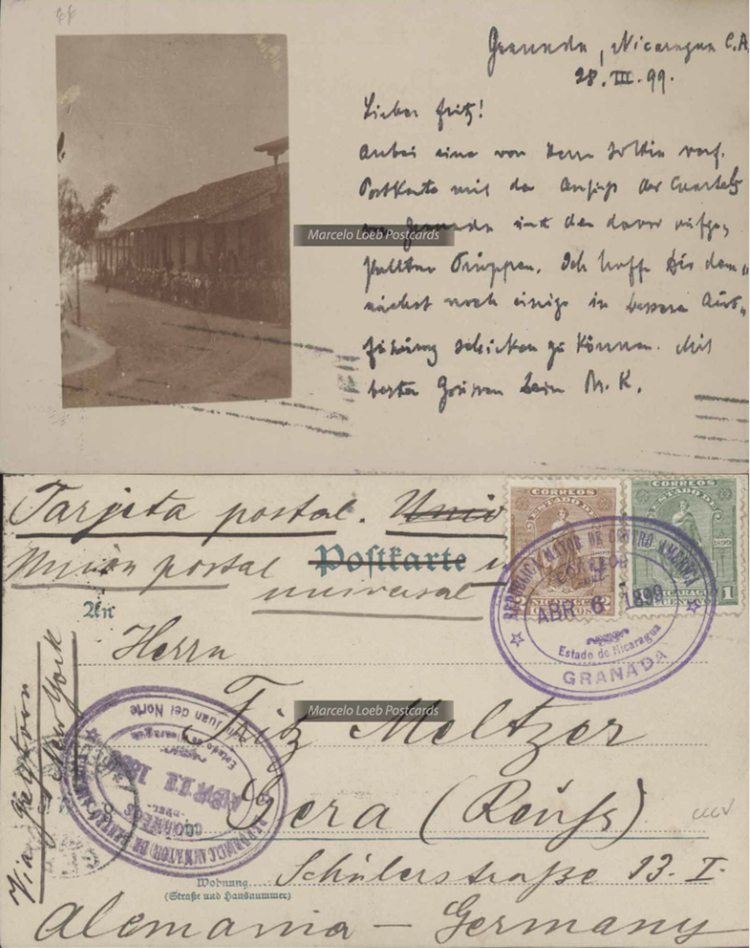 Such cards were introduced in the late 19th century (1898) as a form of advertising a business. It usually contained information about a shop’s inventory or a sale. This type of card has two sides. The front side contains shop or business items for sale or hires and an address section on the other side.

How To Determine The Value Of Vintage Postcards

Not just any old dusty postcards can be sold straight out of the counter for a nice price. It has to be the right one. Read on as we delve into how to properly identify what we would like to call “the Golden nugget of postcards” which can fetch you three to four figures.

To do this, you need to look out for these factors as they match to match the current demand in the vintage postcard market:

No matter how rare or old an antique piece may be, a larger percentage of its value is determined by its condition. So if your postcard is riddled with discolorations, torn edges, and signs of molds, then its overall value is sure to plummet. As you’d only be getting pennies or one-tenth of its original value if a fellow collector is interested enough. Sometimes they could even reject the piece.

Another way to tell that your postcard is not in good condition is if you notice any complete loss of original features such as flockings or glitter. The aim of selling such postcards is to ensure there’s enough of these flocking or glitter to keep it looking as good as it was originally made.

See also  15 Rarest and Most Valuable Sacagawea Coins Worth Money

Note: if the postcard appears too perfect, there’s a high chance it could be a reproduction. So hiring an antique appraiser would be the best idea.

For your postcard or collection to have more value, it has to be rare. Either by being one of the few ever made or the ones that have not been destroyed yet. But rarity doesn’t work like that alone. As your rare postcard has to be in demand in the antique market. Because It’s no use if your postcards are rare but nobody wants them. Or if the cards happen to be very new.

Older antique postcards are bound to attract a good price. Especially if they’re centuries old. For example, an old picture postcard that has been posted since the year 1840 was sold in the London Stamp Exchange auction for up to $50,000.

The card had many signs that it was an ancient piece. As it contained many crude workings from its hand-painted design down to its ancient postcard format. Along with the fact that the card was addressed to a famous 19th-century novelist and playwright named Theodore Hook Esq, Fulham.

Note: the best way to track the age of your postcard is to hire a professional appraiser or seek evidence such as its design, the year it was posted, and who it was addressed to (it’s a bonus if the person is quite famous).

In the world of postcard collecting, there are two types of cards in demand. Which are the topographical and topical (subject) cards. Where the topographical cards involve depicting social history with either real photography or in the form of colored and printed animation.

The topographical cards with real photographs on them attract more value. Because they depict real-time landscapes (usually in the past) such as streets, farms, train stations, carnivals, events, and so on.

These types of cards are limited compared to the printed animated landscapes which appear to be more like reproductions. As there can be thousands of them produced in a day. This fact makes them less rare and thus the value is bound to drop. Also, the landscape depictions on them are animated and printed which is less desirable.

For topical cards, it’s all about two things. The subject matter and the artist’s signature. For instance, topical cards depict subjects like children, comics, glamor, novelty, and so on. And these subjects are usually hand-picked and designed by artists. Such cards get most of their value from the artist’s signature. As their value could hit 3 to 4 figures with just that one feature.

Great examples of topical cards include:

Postcards made from major European countries such as Britain, Germany, and France are more common in the collection market. However, Chinese cards with legit postmarks are rare and can attract more value. This also applies to postcards that are rarely used natively.

How To Date Vintage Postcards

Here are several ways to determine the age of your postcard:

Where To Buy Vintage Postcards

You can buy them in your local antique mall or shop. If such doesn’t exist in your area, then you should get them online. As many collectors sell their collections on eBay and Etsy.

Some retailers even have personal online stores ready for business.

Where To Find Vintage Postcards

You find vintage postcards at your local postcard show, auction house, or antique malls. It is best to find an antique postcard club. As it might give you the connection needed to gain access to a wider market of vintage postcards.

They can be used to identify the type of postcard you have at hand. As each postcard has a certain way the serial number will be written.

How To Find The Value Of Vintage Postcards

Here are various steps to take when finding the then value of your vintage postcard collection:

The first factor to focus on is the overall condition of the card. If it’s in mint condition then you’re more likely to profit from its expected value. If not then there’s a high possibility you might not benefit enough from its sale or even sell in the first place. After assessing your postcard’s condition, the next action is to look out for factors that determine its value. Such as rarity, age and others listed earlier in this article.

Once you’ve studied the card, the next step is to look it up on the internet. Search for postcard guides so that you can use them to make accurate references in terms of key features. Which can push the value of your postcard.

Compare your findings with similar postcards online. You can do this with eBay, esty.com, and any other antique store. This might not give you the exact value of your postcard, but you can use this to get an estimate of its expected value.

If you don’t feel like you have a grasp of your postcards or collection’s actual value then it’s best to hire a professional. With this service, you should be able to sell your findings at a good price.

Collection postcards is a fun hobby to adopt but so is gaining its financial benefits. You should be able to do this easily as we’ve provided the tools needed to be as well informed as other collectors in the market for vintage postcards. With factors to consider such as:

You should be able to assign a good price for your postcard or collection. And if you still don’t trust your price, then it’s best to hire a professional appraiser. 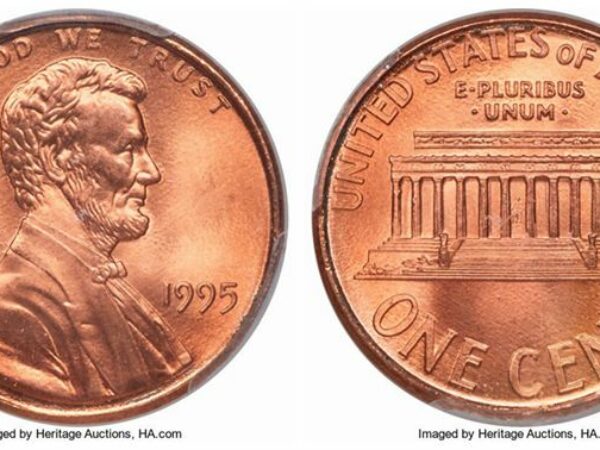 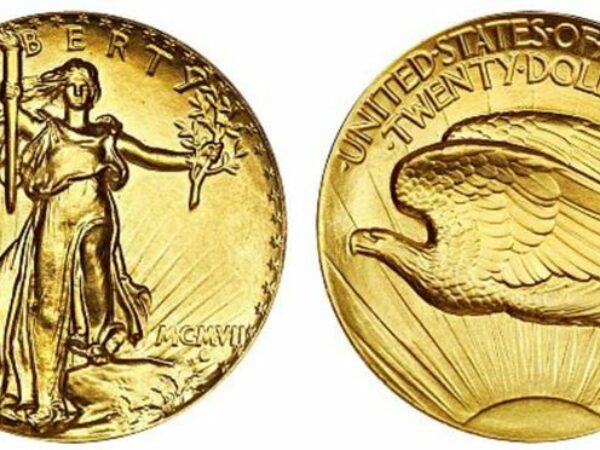 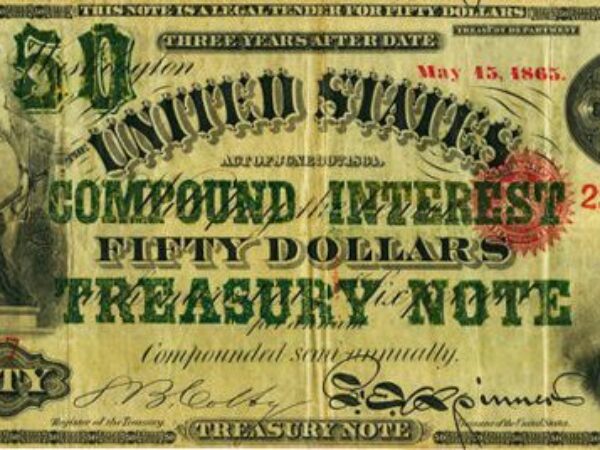 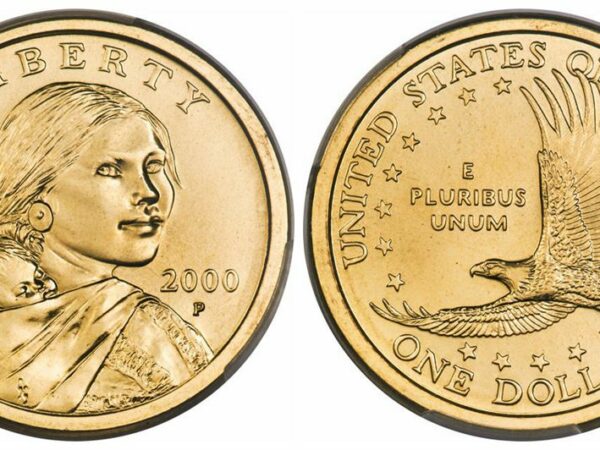