They say every journey begins with one step. It is true also in sports. Every great player was once a rookie. This article is dedicated to the rookie year of Mark McGwire who is a former professional baseball first baseman. His career spanned from 1986 to 2001. Big Mac, as he was fondly called back in his game days, played for the Oakland Athletics and St Louis Cardinals. 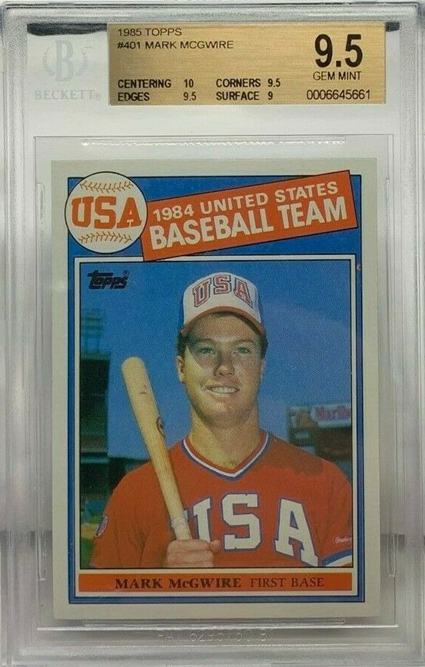 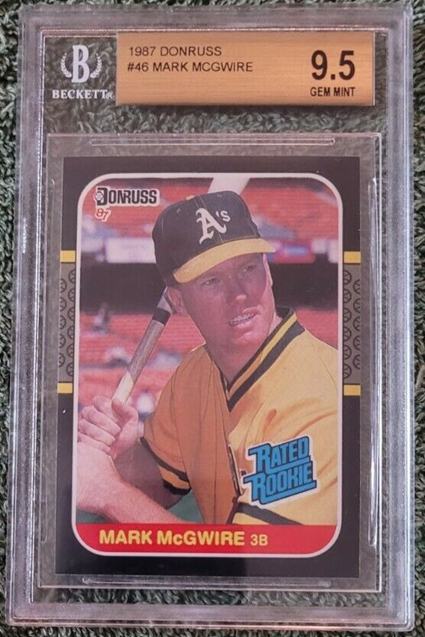 This card was made to celebrate the memory of McGwire’s rookie year. It features him wearing the Athletics baseball cap and jersey. He holds his bat in the swinging stance. He could have been in a real game or have been posing for the camera. At any rate, this was 1987 when he was maintaining his rookie status, delivering home run hits. He delivered 33 home runs and secured a spot for himself on the American League All-star Team. Beckett Grading Services graded this card at 9.5. 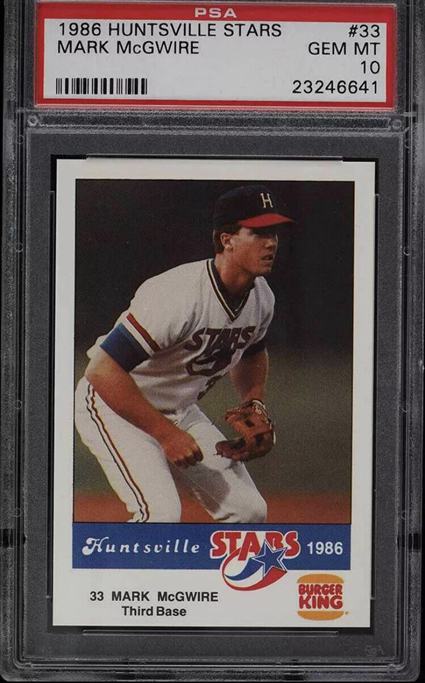 This is a Huntsville Stars rookie card for Mark McGwire. It shows him in a real game in 1986, the year after he retained his rookie status. McGwire played 18 games this year. His success as a rookie was largely influenced by the three years he spent at the USC and on the 1984 US Olympic team. So by his rookie year it was as though McGwire was born ready for the games. This card is one of the most valuable on this list. It was graded by PSA at a full 10. 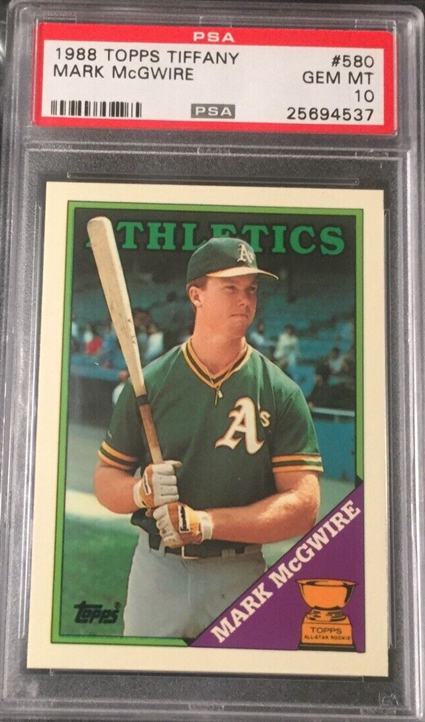 McGwire is seen posing for a picture in this rookie card made by Topps in 1988. He is wearing his Oakland Athletics jersey and holding a bat. He is quite young here as well. In 1988 he was making all-star appearances. He made 32 home runs this year making him the first major leaguer to hit 30+ home runs in his first four full seasons as he continued to bring hits until 1989 and 1990. This rookie card is graded PSA 10. 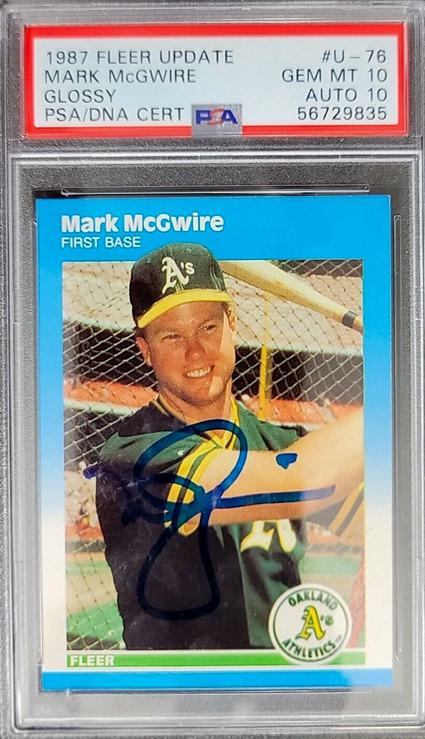 This rookie card was made by Fleer. The Fleer company started making sports cards in 1923 with baseball cards. By 2005 the company had been acquired by Upper Deck company. This card here shows McGwire in his elements.

From the looks of it, he must have been posing for the camera in this picture. He is seen holding his bat wearing his Oakland Athletics uniform and cap. Behind him are the bleachers where spectators would soon be watching him do magic with his bat. This card was graded PSA 10 and signed by McGwire, making it even more valuable. 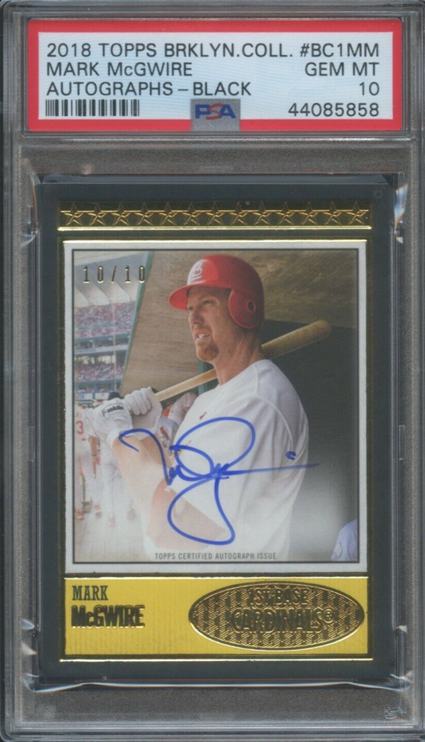 Topps made this card in 2014, bringing back the memory of McGwire’s rookie year. It shows him holding a bat and wearing the uniform of the St Louis Cardinals. He looks much older here as well. McGwire was traded to the Cardinals in 1997 where he finished ninth in home runs even though he played just two-thirds in the league. He played in 51 games with the Cardinals that year compiling a .253 batting average, 24 home runs, and 42 RBIs. This rookie card is signed, and graded 10 by PSA. 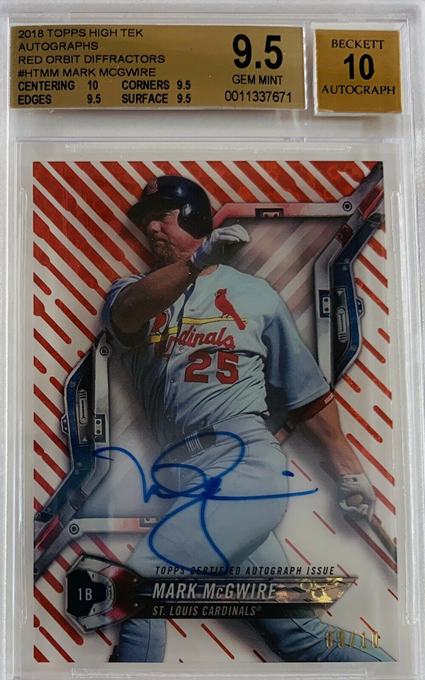 This Topps card was made in 2018. It is graded 9.5 by Beckett Grading Services. It comes with a signature from McGwire himself and has an old picture of him on it. He is wearing a St Louis Cardinals uniform in this picture. He has just swung his bat at a ball. It is any of the years between 1997 and 2001. He may have just hit a homerun when this picture was taken. 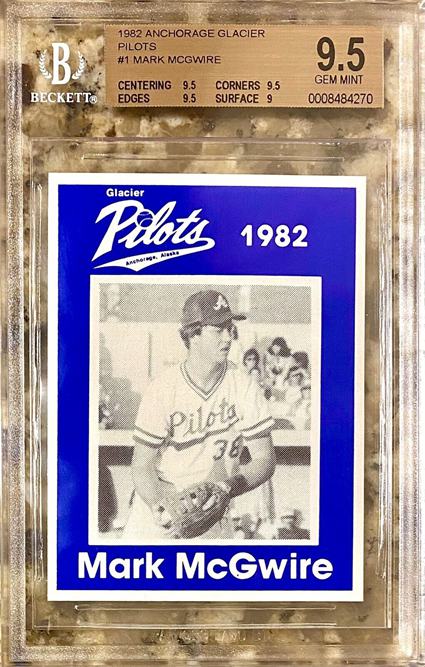 This rookie card goes far back to 1982 before the world of baseball got to know about McGwire, long before his rookie year in ’87. Perhaps Anchorage Glacier, the maker of the card, wanted to let us know just how far the athlete had come.

Little is known of McGwire’s time in college baseball but it is clear from his rookie year that he must have been an exceptional player even back then. As earlier noted, he had a stint playing with the 1984 US Olympic team. This card was graded 9.5 by Beckett Grading Services. Rookie cards are about the beginning of a player’s career so we let this date be. 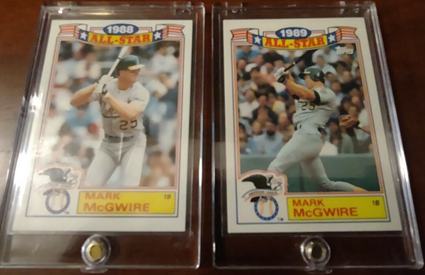 This ungraded card was made in 1989. It features McGwire in action. He is in the swing here, maybe a home run. McGwire was one of the players on the team who played a great part in the championship club that defeated the San Francisco Giants in the Earthquake Series, the famous 1989 world series. It was called the earthquake series because it involved two participant cities that lie on both sides of the San Francisco Bay. 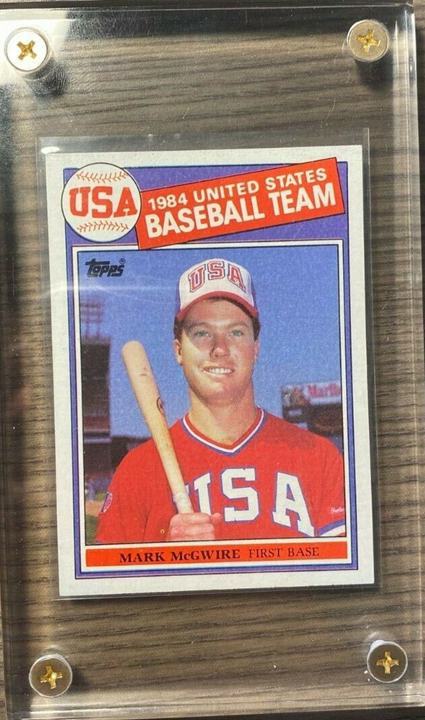 McGwire is seen here on this rookie card with his bat. He definitely posed for the picture as he seemed relaxed and pleasantly gazed at the camera for the shot. This is a 1984 rookie card made by Topps. This is the year he was drafted tenth overall in the 1984 major league baseball draft by the Oakland Athletics. This card is upgraded but considered valuable. 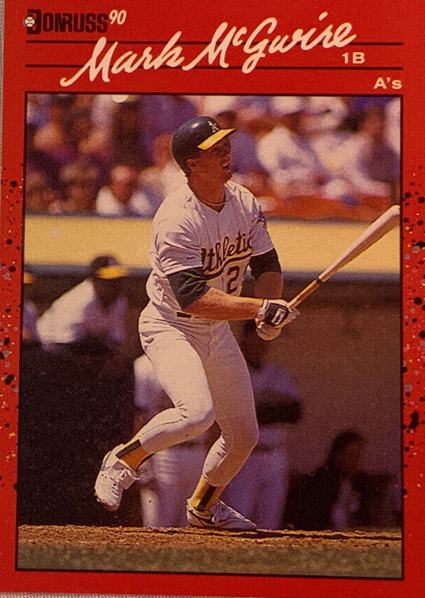 You’d love Donruss when they capture moments on cards. This rookie card has McGwire on it with his bat. The angle, the color palette and everything about this card just brings back the good old days of baseball. McGwire is here about to swing or has just done so. Whatever the case it was 1990, the year he gave the team 39 home runs, the first major leaguer to ever do it three times in a row. The card is ungraded, valued at $120. 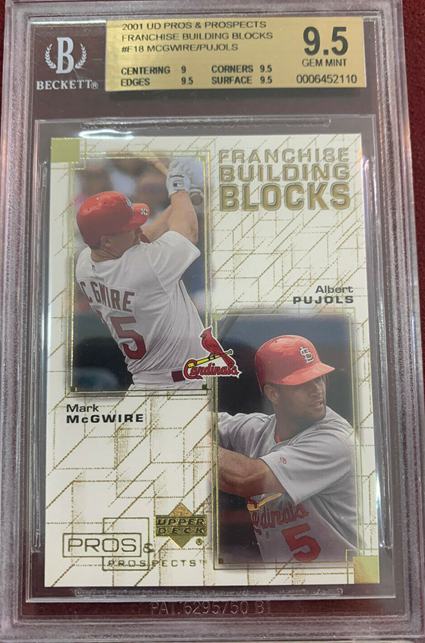 McGwire was the swinger. He is seen on this card swinging and winning. The energy from his rookie years never waned all through his career. This card reminds fans of this truth in 2001 when it was made. He is wearing the St Louis Cardinals uniform here which means it was close to his retirement as a player in 2001. This card is graded 9.5 by BGS. 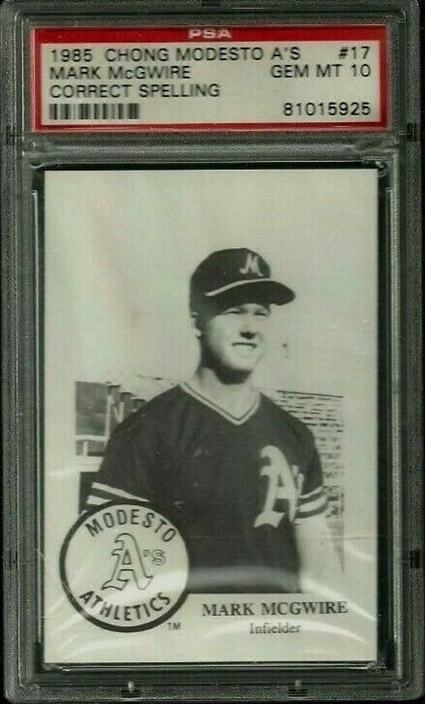 This rookie card features a retro picture of McGwire here. He is wearing the Oakland Athletics uniform here even though it was 1985 before he joined the team. It could also be a picture from a later time between 1986 and 1997. In 1984 McGwire played with the Los Angeles Team at the summer Olympics. He played Pan American games and international cups as well. This picture could have been taken during any of these games. 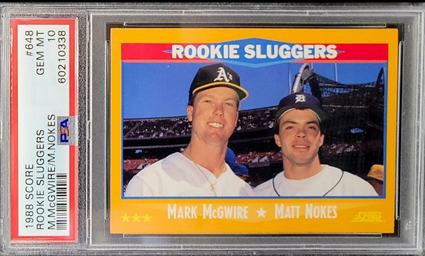 This rookie card was made by Score to remind fans of McGwire’s rookie year. It is named Rookie Sluggers and with him here is Matt Nokes. This card was made in the 1988 season. On July 3 and 4 he hit home runs that helped his team win in the 16th inning of both games. This card was graded 10 by PSA. 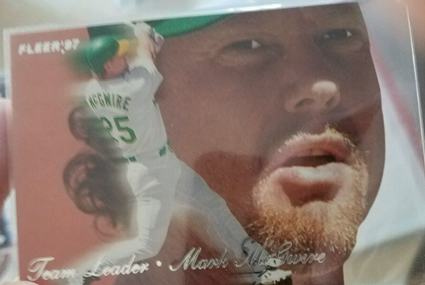 This is a card made by Fleer showing an image of McGwire’s face and of him swinging the bat. It was made in 1997. He was close to retiring in a few years. By July of 1997 he had already stacked up 34 home runs then he was traded from the Oakland Athletics to the st Louis Cardinals. He led the majors with 58 home runs this year. His contract was running out at this time too and there were talks about him playing for the rest of the season and moving on to a new team. But he signed a new contract to stay with the Cardinals instead. 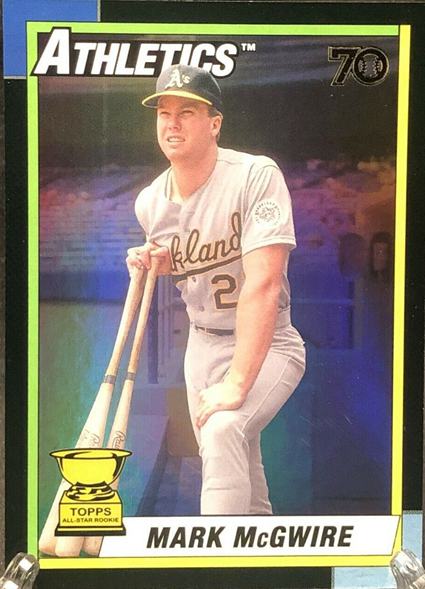 McGwire is with the Oakland Athletics here in the picture featured on this card. Topps made this one in 2001. It is ungraded. He experienced a resurgence in his career between 1992 to 1997. He was on fire in those years. For example on April 21, 1997, he became the fourth and final player to hit a home run that went over the roof of the Tiger Stadium in Detroit. It was a shot that was estimated to have traveled 491 feet. 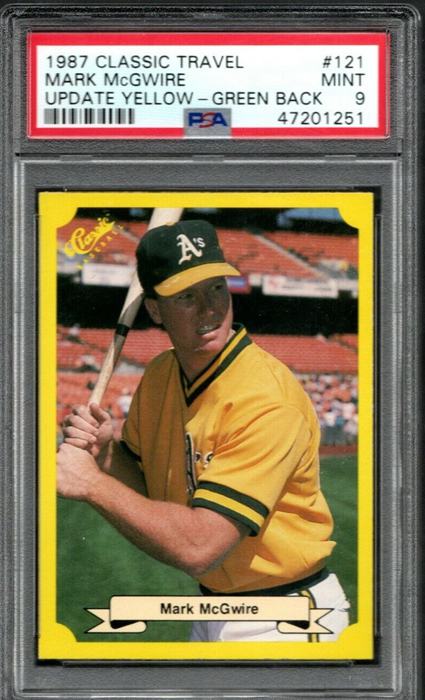 Classic Travel made this 1987 rookie card with the picture of McGwire on the front. Here he looks like he’s about to swing the bat. This was his rookie year and he was playing for the Athletics. This year he led the AL in home runs and also tied with Andre Dawson, Chicago Cubs right fielder for the major league lead. 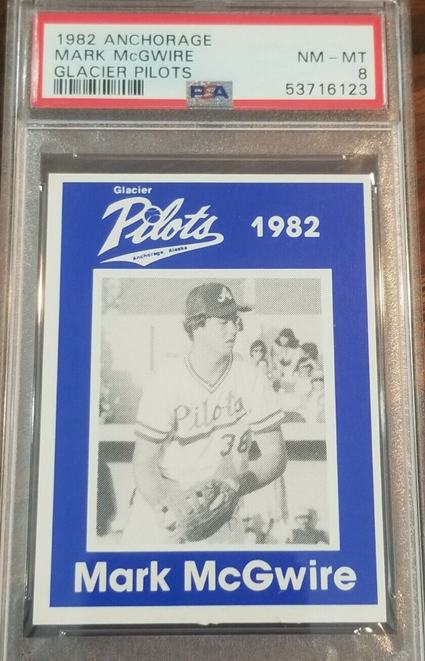 This beautiful rookie card features a retro picture of Mark McGwire in 1982. Here he wears the Anchorage Glacier Pilots uniform. McGwire played under coach Jim Dietz whom he remembered fondly. It was after freshman year ended that he joined the team in Alaska. This card is graded 8 by PSA. 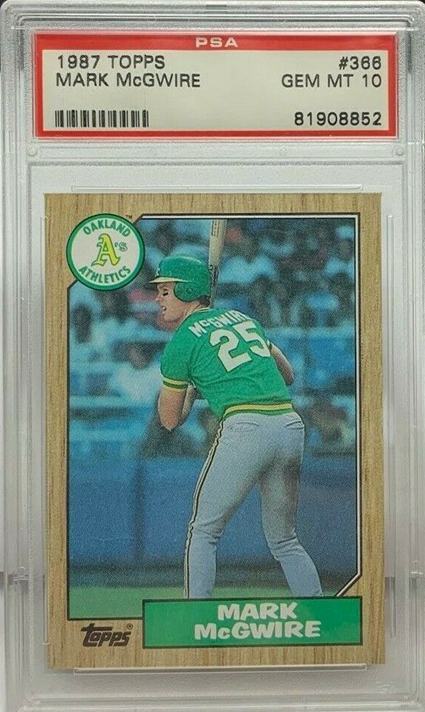 Here’s yet another valuable Mark McGwire rookie card that is quite hard to find. It is a Topps card that has been graded 10 by PSA. The card dates back to 1987 when McGwire played for the Oakland Athletics. It was recently sold on eBay for $573.47

McGwire retired from playing baseball after the 2001 season. His statistics dropped in later years as he tried to avoid injuries. Yet, fans can look back and smile at the joy they felt at being a part of his career, watching him play from game to game, and season to season. Do you have a Mark McGwire rookie card that you believe is valuable? You may want to share the value with the world. ? 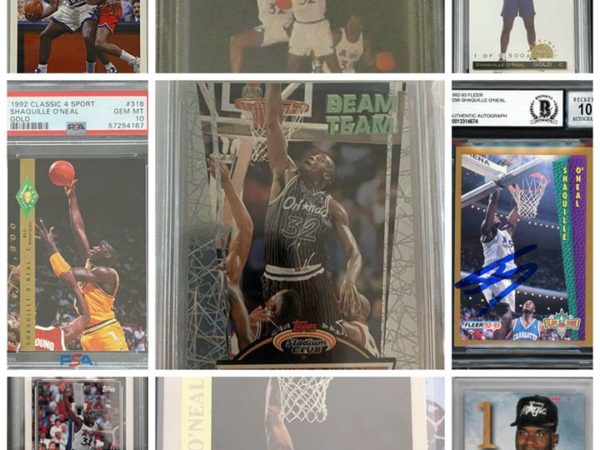 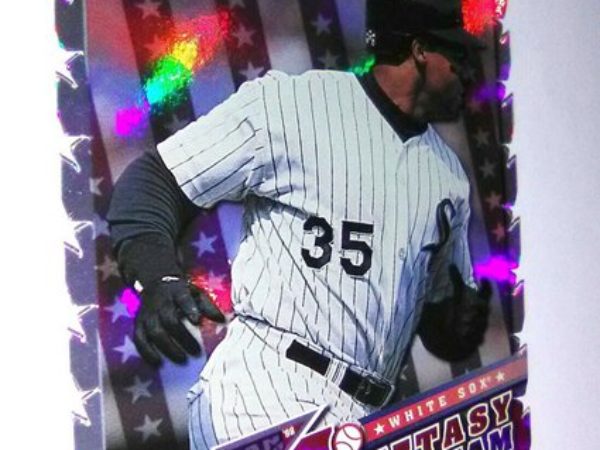 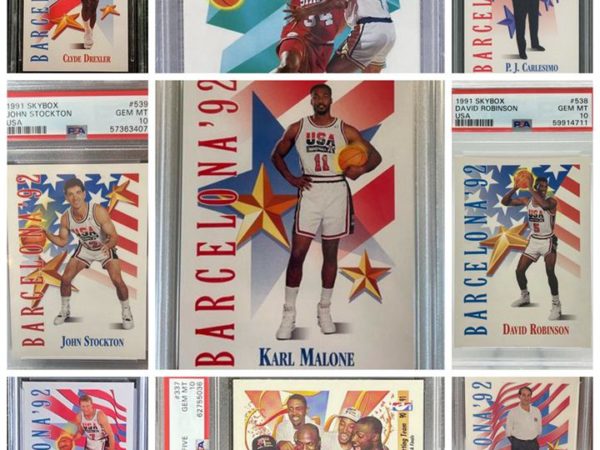 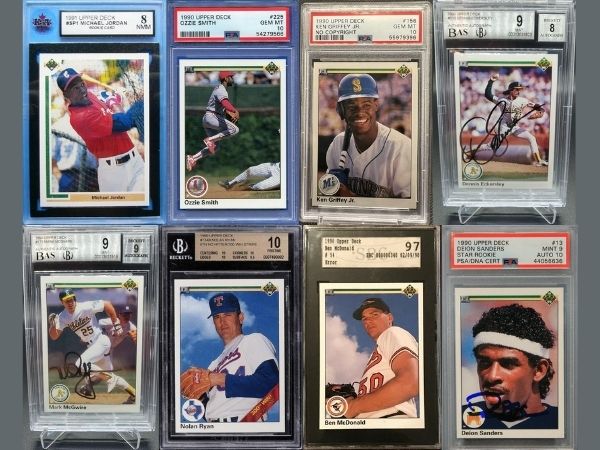