For your home, you might want to look at Federal glasses if you want elegant and distinctive glassware. Known for their vivid colors and exquisite patterns, these lovely pieces are now frequently referred to as Depression glass. These Depression glass items are simple to find and a pleasure to add to your dining collection, whether you’re looking for plates and bowls, glasses, or sherbet cups.

You’re likely to be able to find a stunning piece or set close to your home because antique shops are recognized for having huge collections of Depression glass. However, when looking for Federal glass, make sure to adhere to these useful tips.

The varieties of precious Antique Federal glass patterns that are available will be discussed in more detail in this article including Federal glass identification and value.

What is Federal Glass?

In the early and middle decades of the 20th century, the United States mass produced a particular form of glass known as federal glass. In 1900, the Federal Glass Company was founded in Columbus, Ohio. Although the business was around until 1979, its glass products from the 1920s to 1950s are what make it most famous. Although they are not exactly the same, Federal glass and Depression glass are occasionally used interchangeably.

While Depression glass was mass produced during the Great Depression era (1929-1930s) by a number of companies, including the Federal Glass Company, Federal glass was created especially by that company.

Over time, Federal glass’s appearance and features changed. The majority of the first products the company produced were bottles and jars made of clear glass. By 1914, it was producing a variety of objects in hand-blown glass as well as some pressed glass designs that mimicked then-in-vogue hand-cut glass.

Molds were used to create the majority of Federal glass, and most of these molds were purchased from other glass producers. Because it was frequently quite similar and based on the same designs, it might be difficult to distinguish earlier Federal glass from glass made by other makers.

By the 1920s and 1930s, the Federal Glass Company began producing institutional glass for hotels and the hospitality business in addition to complete tableware sets, many of which were colored. Because they began to have the business’s logo—an F inside a shield—between 1927 and 1932, some of these Depression-era collections are simpler to recognize.

If you find some Depression glass but are unsure about the manufacturer, there’s a good probability it will be Federal glass regardless of whether it is stamped or not as the Federal Glass Company was the largest producer of Depression glass by the 1930s.

On many Federal pieces, including this one, a “F” within a shield was utilized, although some pieces were left unmarked. Through pattern recognition, the unmarked artifacts are identified as Federal coins. 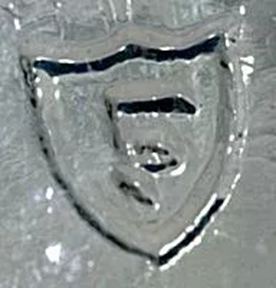 Finding bubbling within the glass or apparent seams signifies that the pieces in inquiry are possibly credible; however, the most certain way to identify if a piece originally belonged to the Federal Glass Company is to search for these few small details. Federal glassware is unsurprisingly seemingly identical to all other Depression glass brands.

Identification Details to look for

Knowing what pattern the piece contains is another crucial aspect of collecting Federal glass; given that some patterns are rare or valuable than others, you should know what standard issue pattern the manufacturer pressed into your pieces before attempting to sell them. It’s possible that the box of colored glass you planned to sell for $20 is actually worth several hundred dollars. The following are a few of the Federal Glass Company’s most valuable designs:

Federal glass is often inexpensive; however, some patterns are worth more than others. Some patterns stand out among others and are simple to identify.

Each piece of Federal glass has a different value. But despite the wide variety of patterns and styles available now, depression glass costs are still affordable. Individual pieces should cost less than $100, though sets can be expensive.

This comprehensive guide will assist you in identifying 15 of the most valuable pieces of federal glass.

Federal Glass produced the Diana design between 1937 and 1941. The glass has a ribbed pattern that forms waves around the borders of the piece.

One of the more iconic federal glass patterns was the short-lived Madrid pattern, which was available from 1932 to 1939. It comes in opaque blue, transparent, and yellow colors and has a gorgeous flower and filigree design. A replacement single plate can cost anything from a few dollars to more than $20.

The Lovebirds design, often referred to as the Georgian, was first used in textiles in the late 1940s. It includes two birds perched on a branch amid geometric patterns and delicate flora. Green is the color most frequently used in the Lovebirds layout. For example, this feral glass lovebird pattern sugar cup sold for $32.00 at an auction site. 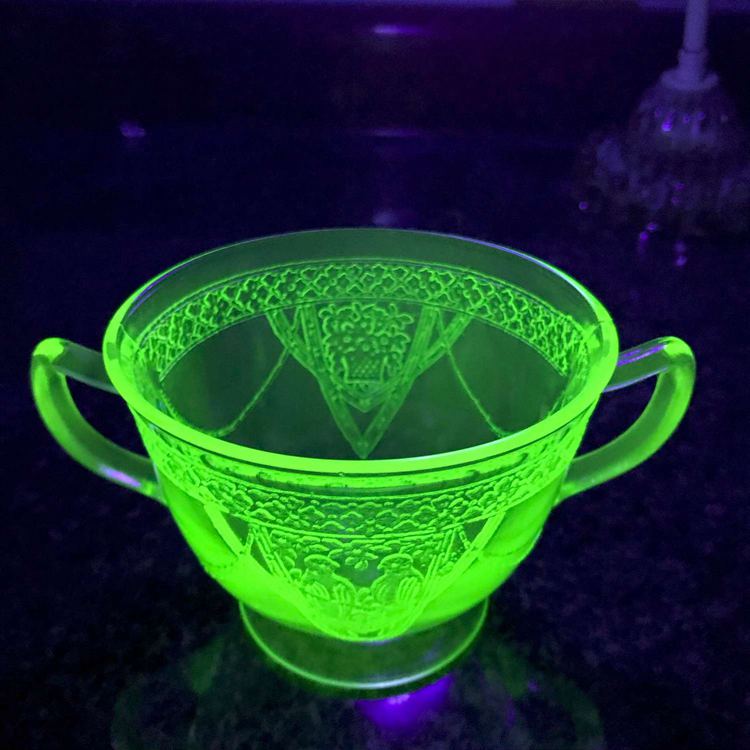 One of the more well-known Federal Glass patterns is the legacy pattern, which debuted in 1940 and lasted until 1955. It has a flower, dot, and ribbon scrolling pattern. Crystal clear is where you’ll most often find heritage designs.

One of the most intricate and stunning designs seen in Federal glass is the Normandie pattern. An alternate pattern of a splash of flowers and a crisscross grape-like pattern is carved into the walls of each sherbet bowl, cup, and bottomed open sugar bowl. The dinner plates have a flowery pattern that repeats around the rim with a cluster of flowers in the center, while the saucers are smooth pieces of glass.

This pattern frequently comes in marigold, a shade that is rare among the other patterns. Furthermore, the marigold shade can occasionally be seen in translucent, opaque, and radiant forms, giving the Normandie pieces a copper-like appearance. Normandie is also available in transparent, pink, and amber.

The Mayfair pattern is yet another stunning design from the Federal Glass Company. The plates’ edges and cup rims have scalloped edges, and the pattern features geometric shapes encircling a miniature bouquet of flowers.

The Parrot pattern was a fairly short-lived design that was dropped by 1931 after being presented in 1930. This pattern has a two-parrot motif that is contained within a wreath of leaves, as you might infer from the name. The most typical colors for the Parrot pattern are green or yellow, and it is highly expensive. For bowls, platters, and other goods, the value might range to $360.

The production of Sharon, the lone survivor of the “battle of the roses,” continued into 1939 and became a big seller. Sharon continues to be one of the most widely used patterns. The pattern and colors are vivid. Green, pink, and amber versions of Sharon were created. The most accessible color is amber, also known as “Golden Glow” in the original catalogs; the most in-demand color is pink, also known as “Rose Glow,” and the most difficult color to locate is “Springtime Green.”

One of the more well-known and rarest Federal Glass patterns, especially in cobalt blue, the Royal Lace pattern was first released in the 1930s (1934 to 1941, to be exact). This pattern is stunning and eye-catching, with a design that combines magnificent flora and lace.

The 1950s saw the emergence of the Cameo pattern. The clear glass has an engraved floral wreath design, sometimes with more foliage inside the wreath and other times with nothing. The most typical place to find cameo patterns is on clear glass.

One of the first designs Federal produced in green, between 1928 and 1933, was rope. The 5-5/8 Saucer Set Colonial Fluted Green by Federal glass sold at the auction site. 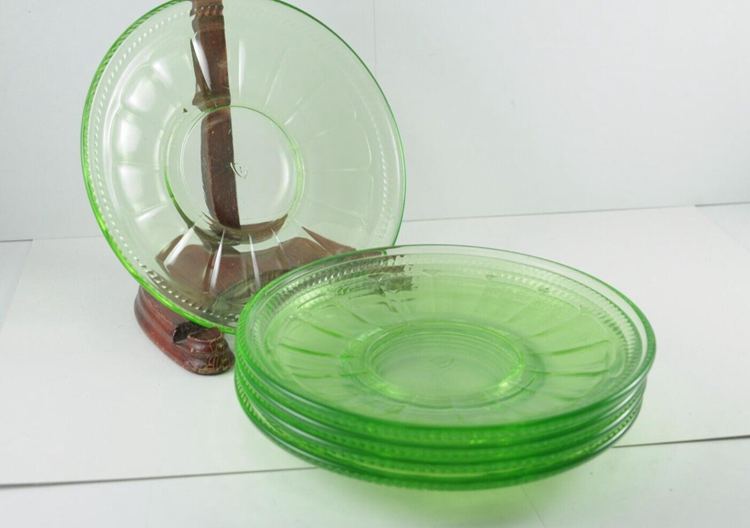 Additionally, the Fedral Company developed “heat proof” sets with gold decorations. Their “Golden Glory” pattern—which is white with gold leaf sprays—was first produced from 1959 to 1966 and then was re-released in 1978.

Federal’s amber color was initially labeled as “Golden Glo.” Dealers and collectors also occasionally call to it as the “Spoke” design.

Green is next in frequency of occurrence after amber. There were similar pieces made in pink and crystal (clear).

Manufactured between 1929 and 1933 by the Federal Company. The Block Optic is available in three different designs now. But there is a common value among the three styles.

The first is a footed bowl, the second is shaped like a mug, and the third is a higher footed cone. These bowls are available in clear glass, pink, white, yellow, and green hues. The cream pitcher is occasionally included with the sugar bowls.

List of Some Sold Federal Milk Glass at auction sites

Here is the list of few sold Federal milk glass:

How to Find the Value of your Vintage Federal Glass?

For beginner and budget-conscious collectors, Federal glass is the perfect vintage items. Generally speaking, the price of a single piece of Federal glass can range from $5 to $45-50, depending on its rarity and quality. Federal glass is generally priced on the lower end of the antiques market.

However, discovering almost entire, sets of particular patterns in a single color can be worth several hundred dollars. One auction, for instance, has a 4-piece set of blue Madrid plates sold for about $40 and a 4-piece set of amber Madrid sherbet cups listed for almost $20.

Here are the Factors that helps you in finding the value of your Antique Federal glass:

The pattern, age, uniqueness, and condition all affect how much Federal Glass is worth. The Diana and Madrid patterns of Federal Glass—two that have already mentioned—are among of the more expensive ones.

Let’s look more closely at the elements that influence the value of Depression glass patterns:

In general, an older piece of Federal Glass is more likely to be valuable than a newer piece.

A pattern will be worth more if it is difficult to find and no longer produced. A cookie jar can cost up to $550, and a water tumbler can cost up to $85—just like these Royal Lace pattern pieces!

An object in great condition—one that has no chips, cracks, or scratches—will probably be worth more than one that isn’t.

The sheer amount of styles and manufacturers to choose from makes collecting Federal glass appear intimidating. Picking a specific quality to start looking for, however, is a less stressful way of approaching Depression glass collections. You can consider the following guidelines as a starting point for your early career in collecting:

Where to buy these Antique Federal Glass Online?

Searching online is your best option if you need to find one immediately. Consider the following sites:

The Federal Glass Company was one of the most productive glass manufacturers in America during that time. Depression glass is any glass produced between 1929 and 1939. Look for the distinctive shield mark with a capital “F” imprinted on the piece to recognize Federal Glassware.

The phrase “Federal Glass” refers to a business with its headquarters in Columbus, Ohio, that produced pressed glassware that was well-liked in the early 20th century. Other name for the glass type that the company created is depression glass.

Individual pieces of Federal glass can range in price from $5 to $45-50 depending on their condition and rarity. Federal glass is typically found in more cheap categories on the antiques market.

Petal is a very attractive pattern that flourished in the 1960s and 1970s (seen at right). A sequence of arches extending outward from the center with crosses at each arch’s tip make up its characteristic shape.

On many Federal pieces, including this one, a “F” within a shield was utilized, although some pieces were left unmarked. Through pattern recognition, the unmarked artifacts are identified as Federal coins.

In conclusion, federal glass patterns are a fantastic choice for glassware enthusiasts and budget-conscious consumers. Before making a purchase, make careful to complete your homework because some federal glass patterns are worth more than others. Moreover, if you’re unsure whether a piece of glassware is federal, look at the pattern or search for a mark bearing the letters “F” in a shield. This in-depth article examines the prices of 15 of the most expensive pieces of depression glass.

We hope that this article has clarified any remaining questions you may have concerning Federal glass.