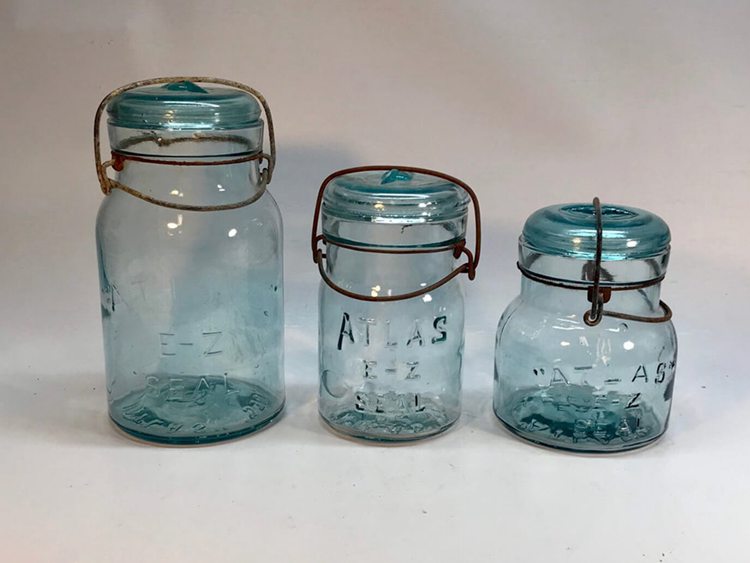 Atlas Mason Jars are one of the most valuable and popular canning jars ever made. The “rubber ring under the lid” invention instantly hit homemakers who needed to preserve food longer and better.

Today, the vintage Atlas Mason Jar’s use surpasses food preservation to keepsakes and decoration. Think about anything that goes into a container, and we bet the Atlas Mason Jar can hold it – Scented candles, mini bulbs, cocktails, coins, and more.

Unfortunately, the renewed interest in canning containers doesn’t automatically mean it’ll make you a fortune. Atlas Mason Jars sell under $10 – $15 on average, and the valuable ones aren’t worth more than $200 individually.

Also, to help you in your collection journey is a total value and identification guide, so you don’t feel overwhelmed by indulging in your new hobby.

We compared prices across multiple online vendors to bring you the ten most valuable Atlas Mason Jars today.

Hazel-Atlas produced thousands of canning jars as one of the “Big 3” glass companies in the 20th Century USA. The Atlas Mason Jars were so popular that they came in four standard sizes – Half-pint, Pint, Quart, and Half-Gallon.

The ATLAS name is boldly inscribed on the front and Mason with an HA underneath.

The Hazel-Atlas Glass Co. manufactured Simplex Mason Jars for a limited two-year period from 1906 – to early 1908. Underneath this jar, you’ll see a stylized “TF” boldly embossed as one letter with the F’s dash shooting out from the T’s stem.

Look beside the TF sign for the H over A Hazel-Atlas mark to ascertain it’s an Atlas Mason Jar.

The Atlas Junior Square Mason Jar is a limited-edition design produced only in ¾ pint sizes. It gets its name from its size and design, being a miniature of the Atlas Square Mason Jar. Unlike its parent design, the ¾ Pint Junior doesn’t feature a two-in-one lid but a lid and band style.

It’s easy to identify this mason jar because you’ll read the words ATLAS Junior Mason on the body.

The Atlas Good Luck Mason Jar has a big four-leaf clover logo on its face signifying Good Fortune. Above the Clover is the ATLAS name in a half-roundel forming an arc.

The Good Luck Mason Jar is one of the rarest Atlas jars in existence, consequently making it invaluable. Check out this video.

The Atlas Special Mason is a square version of the Atlas Round Mason (Strong-Shoulder) jar. It uses only three standard Atlas sizes – Pint, Quart, and Half Gallon – excluding the half-pint.

Its lid has a rubber seal like the strong-shoulder Mason Jar, restricting its storage to dry products only.

The Atlas Whole Fruit Jar is a cylindrical container with only three standard sizes – Pint, Quart, and Half Gallon – excluding the Half-pint. You’d see the words “Whole Fruit” written diagonally on the body, forming a line between ATLAS and jar.

Its lid is similar to the E-Z Seal Mason Jar with a lever and clasp for extra reinforcement.

The OG Atlas Mason Jars have the “H” over “A” (the A forms a subscript within the borders of the H’s lower stem) embossment. You’d see the “HA” on the front. It sits between the Atlas and Mason and on the bottom between the ID number.

It comes in all four standard Atlas sizes from Pint to Half-pint, Quart, and Half Gallon.

The Atlas Improved Mason Jar is an aqua cylindrical container with a threaded lid. The first design used the threaded cap to make the Atlas Mason Jars watertight because the others better served dry storage.

The zinc lid locks in moisture and prevents spillage, making it a favorite amongst collectors’ years after its launch.

The Atlas E-Z Seal Jar was the best-selling model for the longest time due to its reinforced lid style. It has a metal rim on the lid that tightens it when the lever clasps down. The E-Z Seal jars four standard Atlas sizes – Half-pint, Pint, Quart, and Half Gallon.

When you look at the front, it has the brand and design names ATLAS E-Z Seal with the Atlas sitting on top of the E-Z Seal. Although there were disagreements about its original production year, historians claimed Atlas Glass Co. designed the E-Z seal before the merger.

Also, some of the containers embossed EZ Seal without the dash, one jar has a manufacturer’s defect leaving the “L” in “Seal” out, and one came without the ATLAS name above the “EZ Seal.” If you ever find the last two, they’ll be worth a fortune.

Also known as the Atlas Round Mason Jar, this cylindrically shaped container has a threaded lid and top. Unlike other threaded containers with steel discs, the Strong-Shoulder uses rubber seals.

However, you should note that it’s only airtight and not water-tight, so you can’t use it for wet storage. That’s because Hazel-Atlas designed this model as a promotional item for banks between 1938 – 1940.

Atlas Mason Jars grouped by how their covers are designed

How To Date Atlas Mason Jars

The easy way is to check the Atlas Mason Jar for an embossed date; however, this isn’t an absolute method. Your jar may have a faded embossment due to wear and tear, and this is the tricky part. Luckily, there are many alternative methods for dating Atlas Mason Jars.

Hazel-Atlas Co. handcrafted pre-1915 models eliminating visible seams. Run your fingers around the bottom of your Atlas Mason Jar for mold seams. If your antique canning jar lacks one, it’s most likely an old model, and if it’s present, it’s a post-1915 creation.

Because antique Atlas Mason Jars were handcrafted, it’s unlikely you’ll find two exact models. So, look closely for isolated microbubbles in the glass, and feel the weight. You’re looking for something thick and weighty, unlike modern designs with light textures.

What’s in a name?

Names are the biggest giveaways for any antique or vintage item because they help you trace the development through the years. Every time a company changes management, and its name, the products undergo creative changes.

Why does Condition Matter?

Since mason jars were traditionally storage containers, collectors look for Atlas Mason Jars in stellar condition. You want to still use it for its designated purpose and more.

Any sign of damage from slight scratches to significant cracks or chips would diminish its value. Surprisingly, manufacturing errors don’t count as damage. Instead, they may increase the value of the Atlas Mason Jars. How does this work?

When producers find a defect in a set of items, they often recall it from the market. As time goes on, they become scarce and qualify as rare finds for collectors. The Atlas E-Z Seal Mason Jar is an example without the “L” in “E-Z Seal.”

Are all Atlas Mason Jars Rare?

Some Atlas Mason Jars are rare finds due to their limited supply causing their value to skyrocket. As a hobbyist, the appeal of rare items is their exclusivity more than quality, although the latter sometimes contributes too.

Because many Mason Jar companies, including Hazel-Atlas, continue production today, albeit, under another management or business name, they’re available and cheap. Many people also prefer buying new containers to old ones since they’ll do the same job.

How to Identify Atlas Mason Jars

Antique Atlas Mason Jars being a famous brand has its downside. Counterfeiters are having a field day with the rise in interest in canning jars for other purposes such as memento storage, juice jars, and scented candleholders.

That’s a significant frustration for collectors and hobbyists who have to sift through the trash for these gems. However, the good news is that there are markings and signs to help you identify genuine Atlas Mason Jars.

The better news is that you don’t have to worry about not knowing the signs because you’ve come to the right place. We’ll put you through the easy steps of identification so that you’ll have no qualms distinguishing the fakes from the authentic designs.

Check for inscriptions on the jar

Check the body of your Atlas Mason Jar for an embossment of the brand’s name – Hazel Atlas or Atlas. Then flip the jar over and check the bottom for a large H and smaller A underneath.

However, there are variations to the H over A mark based on manufacturer location.

The Illinois Glass Company put an “I” in a diamond, Owens Glass Co. used “O” for Owens in a Square, and Capstan Glass Co. put Capstan instead.

Also, note the position of the name embossment. The Atlas name features boldly in the jar’s middle, and Hazel-Atlas sometimes on the side.

What’s the name on your Atlas Mason Jar? Is it Atlas, Atlas E-Z Seal, or Atlas Mason? The first two belong to antique and vintage models, while the last name “Atlas Mason” is a recent development.

Pre-1930s Hazel-Atlas Mason Jars had single-digit mold numbers above or below the “H” mark. After cataloging each mason jar, the first letter represents the manufacturing plant and the four-digit numbers.

Unique characteristics are a dead giveaway when identifying specific models of Atlas Mason Jars. The Atlas Strong Shoulder Mason Jar has sturdy glass at the bottom, while the E-Z Seal Jar comes with a bubble lid and wire reinforcement.

Run your fingers along the seams for a flawless finish which signifies handcrafting typical to the late 19th Century until 1915. By then, the company switched to mass-produced designs with machines that formed bumpy seams on the Atlas Mason Jar’s body.

If you find the same sets of Atlas Mason Jars, you either have a machine-made model post-1915 or, worse, a reproduction from the 21st Century.

Hazel-Atlas Mason Jars typically used clear and aqua blue glasses. The transparent glasses are from the Depression-era (the 1920s,) and in 1936, the company introduced the translucent glass. Please note that there are limited-edition colored Atlas Mason Jars though uncommon.

Some of the unique colors include purple, dark blue, and amber.

Congratulations on reaching the end of the Atlas Mason jar value guide. Now you can confidently date, evaluate, and identify your vintage Atlas Mason Jar like a pro. While collecting this item wouldn’t make you a millionaire, it can be a fun experience.

There are several other ways you can use the Atlas Mason Jar if you’re skeptical about using it for food storage. Here are some ideas you can try

The possibilities are only as far as your mind can take you.

Q: What Year was Atlas Mason Jars Made?

You can read more on this here.

Q: Which Model is Worth the Most Money?

A: Although Atlas Mason Jars are now under the Brockway Glass Company’s management, some models remained with the new name. The Atlas Strong Shoulder, E-Z Seal, and Improved Mason Jars are the top 3 most valuable designs.

Now that you’ve learned the value of Atlas Mason Jars, the next step is identification. Before you pay top dollar for a vintage or antique item, you must ensure its authenticity. While that may seem like a massive feat to a new collector, we assure you it’s a walk in the park.

Q: How Much Are Atlas Mason Jars Worth?

A: An average Atlas Mason Jar retails for about $15 or less, mainly because there’s a muted demand, and its supply is excess. There are, however, a few models that top the market due to intrinsic value appreciating features. What are these features, you may ask? We’ll tell you.