Your old sewing machine might be worth more than you think, regardless of whether it was passed down to you as a generational gift, bought at a yard sale, or you are a keen antique collector.

Do you wish to learn about antique treadle sewing machines’ history, brand, and values? You need to know a lot about the subject because there are so many details.

One of the earliest types of sewing machines is the treadle model. It has a foot pedal that you use to operate the sewing machine while keeping your hands free to complete your project.

Treadle sewing machines, which date from the middle to end of the 19th century, are still in use today as both antiques to collect and, yes, even to stitch! In this article, we’ll find out more about:

And lots of more interesting information. So, let’s dive right into it!

What is an Antique Treadle Sewing Machine?

A treadle sewing machine is manually propelled by a foot pedal that the user’s foot presses back and forth on.

These relics serve as a reminder of America’s industrial might today. They can be discovered in antique shops, auction houses, trash shops, and even garage sales.

The History of Treadle Sewing Machines

Around France in 1830, Barthelemy Thimonnier created a basic treadle sewing machine. Envious local tailors quickly destroyed his factory after his machine was utilized to make army uniforms for the French.

Isaac Merritt Singer received a patent for a more sophisticated treadle sewing machine in the United States in 1850. Although it contained a foot pedal, also known as a treadle, it was based on earlier sewing machines and patent ideas.

This made it much simpler to operate the machine while still having free hands to handle the fabric.

Better manufacturing was made possible with the development of the treadle sewing machine. In order to produce more apparel and textiles more quickly, sweatshops were developed.

Over time, Singer collaborated with other significant sewing machine producers to develop modern designs. Sewing was a frequent family activity in America far into the 20th century due to the prevalence of treadle sewing machines.

What are the Advantages of Treadle Sewing Machines?

Here are some of the major advantages of treadle sewing machines:

The primary benefit of using a treadle sewing machine was that it did not require a hand crank, allowing you to use your hands to work with the fabric while your feet concentrated on the motor.

You might observe these perks while contrasting a treadle sewing machine with a contemporary electric machine:

Because treadle sewing machines are so quiet, they promote a relaxing work environment. You can work while listening to music or your favorite show, or you can just stitch quietly while concentrating on your project.

This sewing machine doesn’t require electricity because it is operated by your feet and the treadle. It can be practically any place in or out of your house, and you can sew wherever you like.

These machines are simple to maintain and can be utilized for a long period of time. They don’t need to worry about computer chips, electrical problems, or wiring concerns; they are low maintenance.

See also  19 Rarest and Most Valuable Bratz Doll Worth Money

Moving a treadle is more activity than using an electrical sewing machine, albeit it won’t make you perspire. You’ll simultaneously engage in a leisurely activity and some light exercise.

Treadle sewing machines, like many collectibles, were made to last. Some are in excellent shape, over a century old, and ready to sew.

In the sewing machine market, there are many different brands to explore. For obvious reasons, only a select few companies have been able to achieve widespread awareness.

In addition, numerous vintage models from lesser-known or virtually obscure brands are still available. Start with the most globally successful, reputable, and promising brands.

Singer practically owned the sewing machine market in the United States until the 1950s, when Japanese-made machines started flooding the market.

Since selling its sewing machine division to Germany’s Pfaff Sewing Machine Company, the company is no longer involved in the sewing machine industry. The Singer name is currently attached to branded models made in Asia for the Pfaff Company.

How to Identify an Antique Treadle Sewing Machine?

The machine is a treadle when the foot pedal on the bottom moves the needle. However, figuring out the treadle machine you own can be a little more difficult. The procedure below can be useful in identifying a treadle sewing machine:

The majority of sewing machine manufacturers emblazoned their company name on the machine or the stand. It is frequently printed proudly on the machine itself or included in the cast iron foundation.

Willcox & Gibbs, Singer, White, National, Howe, and many other names are popular brands. Knowing the brand, you can narrow down the manufacturing date and model number.

There will probably be numbers printed someplace on the machine. Serial numbers on Singer machines are typically seen on the machine’s base. The Vintage White sewing machines usually include a metal plate that has the serial number engraved on it.

Use a tool like the International Sewing Machine Collectors Society to dig up information about the machine after you’ve discovered any identifying numbers on it. You might be able to calculate the date from the data you have.

To find similar machines, you may also look through the ads on antique and auction websites. It will give hints on what you have if you look at the pictures and find out if your machine is comparable.

Look on eBay and Etsy for both incomplete and full treadle machines. You can compare models even if only a portion of the machine is shown in the listing.

Look for Hints about the Date

Although treadle machines continued to be produced into the 1950s, the late Victorian era was when they were most prevalent. Looking up the serial or model number is the most accurate way to find out how old your equipment is.

However, the design itself contains some hints. Machines from the late Victorian era are typically identified by their complex, ornate supports and bases. Simpler designs frequently signify models from the early 20th century.

During the 1800s, established industrial competition enabled the introduction of novel features into subsequent models. Additionally, a specific feature can be used to identify the brand in circumstances where it is unknown. You must be wary of the feature’s supremacy over others, though.

Above all other possibilities, a professional evaluation is certain to provide you with precise information regarding the manufacturer, the year of issue, and the market value of your sewing machine. Find a qualified appraiser at an auction, shop, local antique dealer, or online.

Early material can, to varying degrees, indicate age, present condition, and quality. Even machine materials can reduce the likelihood of unmarked models. As a result, it is very important to determine the market value with additional terms.

Of course, in terms of fully disruptive old ones, it’s not exactly a good point. But with antique versions from the 1950s or such, the point is very significant. Numerous stitching styles, extra features, and weaving results keep people interested.

As the world continued to advance technologically, many additional features were added to the traditional treadle sewing machines. Hence, contemplating these things could get you an idea of how old your machine is.

Depending on the brand, model, and physical condition, treadle sewing machines can cost anywhere from $100 to over $1,000. Rarer models, like those made by Grover and Baker during a short period of time, are worth thousands of dollars.

Your antique treadle sewing machine can be worth a couple of hundred bucks, or it could even fetch you thousands of dollars, all depending on multiple factors that need to be in check for a sewing machine to be considered valuable.

All the factors that can affect the value of antique sewing machines are mentioned as follows:

At the very least, you should ascertain whether the sewing machine is indeed functional. Make an effort to turn the hand wheel slowly (usually found on the right side). Check the bobbin to see if it moves while the hand wheel is cranked.

You can easily get a high value for your antique sewing machine if it dates back centuries yet is mechanically functional.

Under specific conditions, relatively older machines are worth greater than recent ones. The age can be verified by a confirmed patent and a stamped date of production.

However, serial detection is always the best tactic. Simply look up the serial number engraved on your sewing machine, and you may be able to track its year of production.

Machines in good condition can drive demand and prices up. Examine each component in detail to determine its state.

Look for any obvious stains, dings, chips, rust, scratches, or cracks in the design. Whether you are seeking to buy or sell an antique treadle sewing machine, the signs of physical defect can significantly reduce the value.

Anything that is rare has a higher market value than comparable alternatives. And it has to do with the sewing machine’s brand, model, year, and specialization.

To make a deal, you must display or verify that the machine has enough evidence of being authentic and unique.

To satisfy consumer demand, the era offered two specialized types: personal and industrial. Designs for the heavy industry might be worth less than those for the home.

Provenance, though, may add worth not otherwise present. This means that if your sewing machine was previously owned by a famous personality or is unique in any manner, you might be able to get a high value for it, regardless of whether it is personal or industrial.

Various locations have more demand for certain machines. The location of your sewing machine is crucial because it can be difficult to ship machines to some locations.

Get in touch with nearby collectors, appraisers, and antique stores to learn how much your equipment is worth in your area.

This will enable you to determine whether selling your equipment locally would be preferable or whether exporting it somewhere in order to get a greater price is worthwhile.

Realize that figuring out how much an antique sewing machine is worth is not a precise science. Your machine’s value may fluctuate over time, and one collector may place a significantly greater value on it than another.

Of course, any sentimental value you may have for the machine may also influence it and change its worth over time.

So far, we have gone through the average price of various branded antique treadle sewing machines and covered the factors that affect this value. 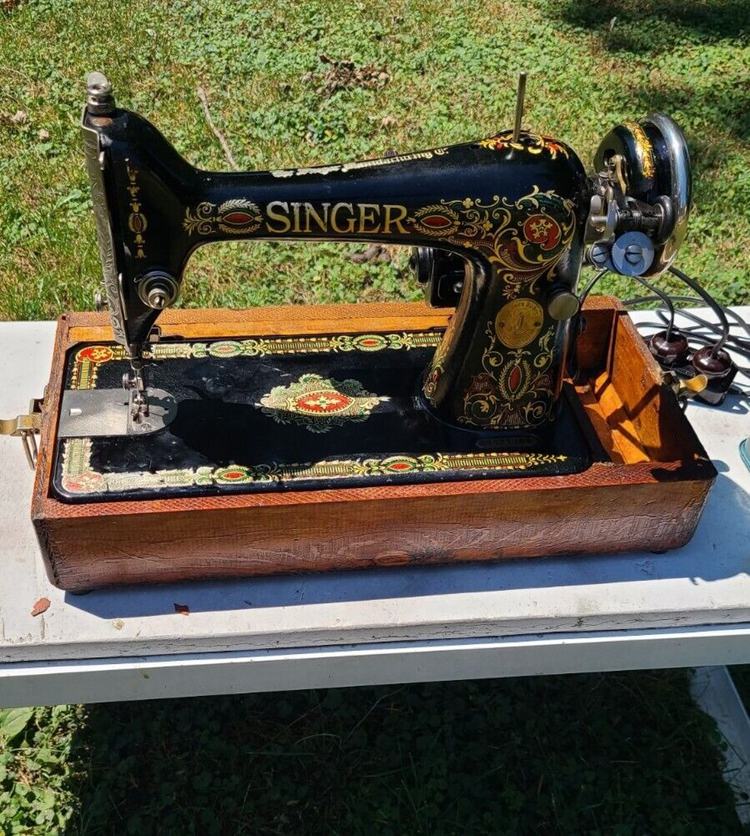 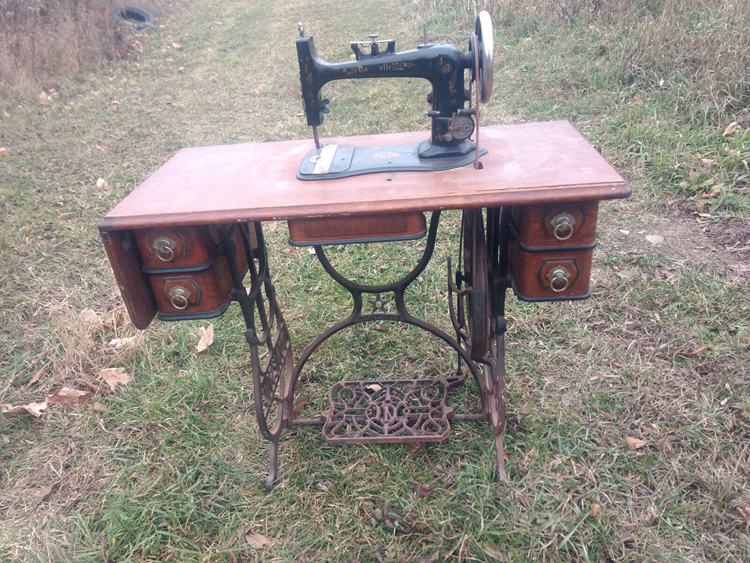 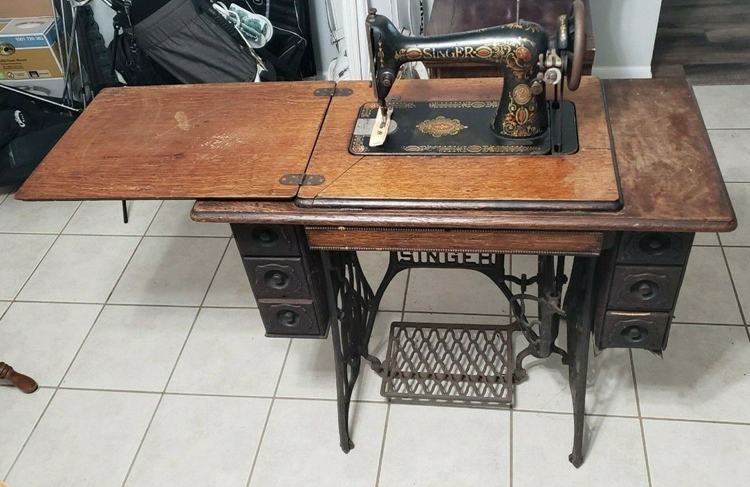 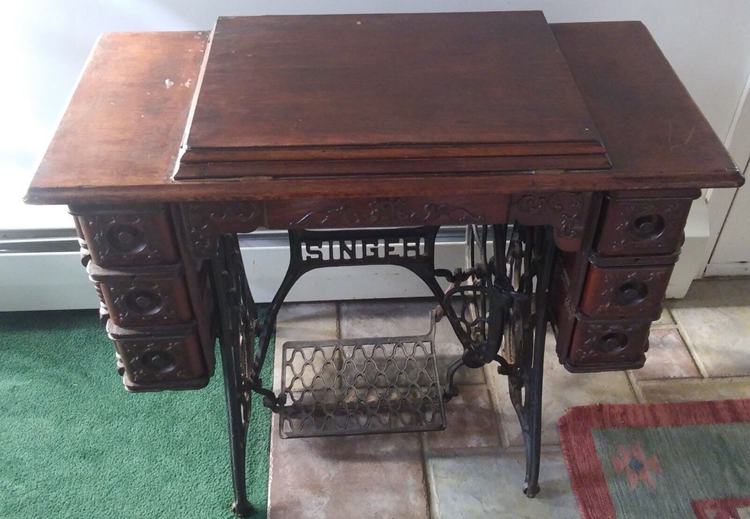 What to Look for When Buying an Antique Treadle Sewing Machine?

This is merely a quick-reference list of characteristics to look for in an antique sewing machine but enough to give you an idea:

Treadle sewing machines are priceless antiques that can be acquired or used for what they were intended for. They allow you to work on your project in silence, comfort, without an electricity source, and more accurately at your chosen pace by pedaling the machine through the treadle.

These antiques, which can be found at auctions, online, on eBay, or at yard sales, can range in value from a few hundred bucks to thousands of dollars. If you’re fortunate enough to get one, make sure to take care of it to preserve it as much as you can!

You may invest or earn a little cash with old sewing machines rather easily. However, the precise amount depends on how well you understand the subject.

Hence, we sincerely hope this guide has given you all the information that you need before you make up your mind about buying or selling an antique treadle sewing machine.

Do you happen to have an antique treadle sewing machine? Tell us all about it in the comment section below!